Welcome visitor you can login or create an account.
Home » News Headlines » My Dad Wrote A Porno...BBC's Newsbeat question Maddy from Netherton

My Dad Wrote A Porno...BBC's Newsbeat question Maddy from Netherton

My Dad Wrote A Porno...BBC's Newsbeat question Maddy from Netherton

You never know where we are going to pop up next! 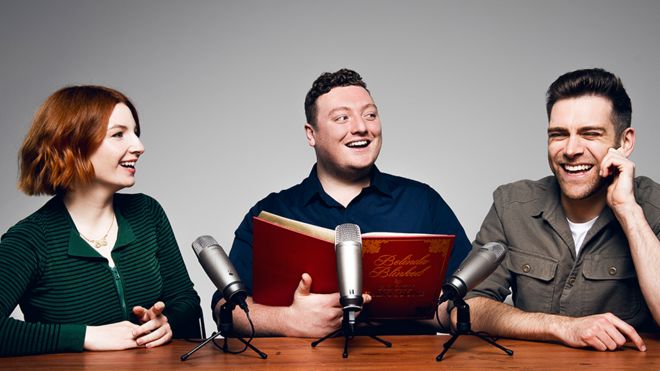 A hundred and eighty million downloads, a world tour, an international TV series.

It's not bad for three friends who started recording their podcast around a kitchen table with cheap microphones.

If you've not even started then you definitely need a quick lesson: Jamie Morton's dad is a retired builder and, in his retirement, he's taken to writing pornography. He's got a pen name - Rocky Flintstone.

Of course, knowing your dad is writing pornography is a bit traumatic but Jamie's embracing it and, in every episode, he reads chapters of Belinda Blinked to friends Alice Levine and James Cooper.

Another thing you need to know - Belinda Blumenthal is Worldwide Sales Director at Steeles Pots and Pans. Yes. This is pornography rooted in the international cookware market.

And if you know all this already, you'll also know how series four ended. It took the dramatic side of Rocky's writing to new levels.

The new series "picks up mere seconds after we left it in book four and the first chapter is called The Aftermath," James explains.

"There is a lot really packed into the first chapter. And you realise that Belinda Blinked has become half spy novel, half erotica. This storyline is going to continue."

It's pretty clear that all three are surprised that they've got to a fifth series. Jamie reveals that his dad is already writing books eight, nine and 10.

"People don't do things by halves when they come to the show," Alice says. "We've had people dressed up as the trellis from book one.

"We've had people being locations, even - the pub or buildings from the show."

Radio 1 Newsbeat got 20 year-old superfan Maddy to put some questions to Alice, James and Jamie.

But she's not just any super fan. Like Belinda, Maddy also has a job in the pots and pans industry.

Maddy: We actually make pans in the UK and I'm in charge of selling them. I haven't heard Belinda sell a single one. And as a seller of pans, I'm quite curious on how her business is doing so well, having so many employees without managing to sell any pans?

Jamie: I don't think she's signed any deals properly, has she? She gives them away a lot.

James: I think the company she works for has actually done a lot worse since employing her and things are really going downhill. It seemed quite obvious to us how she could turn things around. Stop giving them away. Stop giving away 20,000 at the O2 and then you might start making some money.

Maddy: Working for Netherton Foundry, I've travelled all over Britain and to Germany and France to sell pans - and I've yet to meet anyone who's actually turned on by pans. How has she found so many people so turned on by cookware?

Alice: I feel like Maddy is taking this literally - I'm not sure it's the touch of the pan and the stainless steel getting her going. I think, for Belinda, it's the business she is turned on by - the entrepreneur. She's turned on by suppliers, she's turned on by distributors, it's anything in the chain.

Jamie: She's very attracted to the passion that people have for their job.

Alice: She used to work in crockery and probably felt the same way about people working in crockery. She worked in swimwear too.

Jamie: She's done so much and diversified her career.

Alice: Like a great international sales director, you are wedded to the product that you sell and she can find excitement in that.

Maddy: My next question is purely practical. I'm questioning the safety of the workers where Belinda works. Our offices and workshops in Shropshire aren't very safe places to go about these activities because of the machines needed to make pans. Do these workplace activities follow health and safety regulations?

James: I love all the shoutouts Maddy is getting for her company here. Steele's Pots and Pans' office where Belinda works is the main office. The factory is in Scotland, so the office is quite a safe place.

Alice: They have a leather room designed purely for sexual antics so, in a way, they've taken it out of the work environment and have located a space for it.

James: There's a lot of security in the building. Key cards have been given a lot of air time - every employee has one. Nobody is getting in who's not an employee.

Jamie: My dad is very security conscious and he's very health and safety conscious too. He cares about these things. He's thought about it.

Alice: He cares about it more than the sex really. I'd say health and safety has been given more of an airing than erotica.